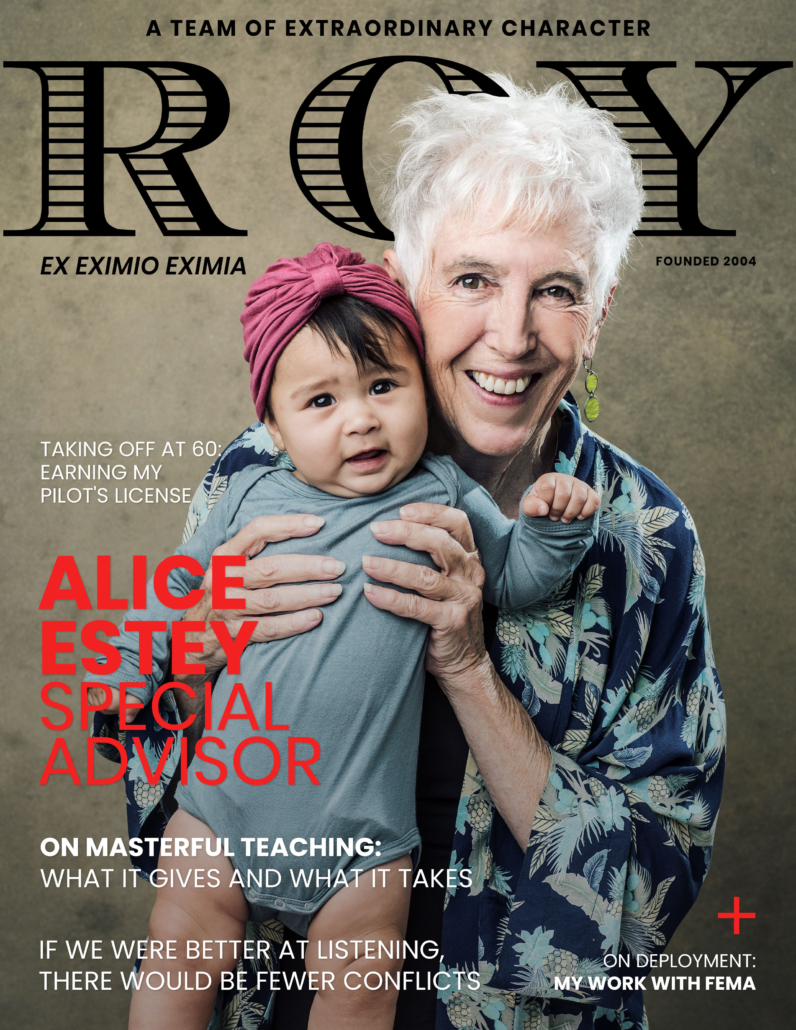 Instructor, mediator and FEMA advisor Alice Estey has touched thousands of lives through her skilled work in conflict management. For Alice, it really doesn’t matter what the situation is, where it’s all going down, or what’s at stake. What matters is her practice — her ability to take apart any conflict, to hear what is really being said and find the opportunities, and put the conversation back together in a way that allows people to figure out a way to move forward. An original co-creator of our Opportunity In Conflict course, Alice has long been a Mentor to Roy Group founding partner, Anne-Marie Daniel.

Your work with the U.S. Federal Emergency Management Agency (FEMA) means you are deployed to some pretty tough situations in disaster-stricken areas.

Yes, tornadoes, floods, hurricanes, wildfires. It’s very emotional and intense for people. When I’m on assignment, I’m in the area for around 30 days. Sometimes it’s six weeks. Things change pretty quickly — and there are new disasters being declared all the time.

What’s your role with FEMA?

I’m an Alternative Dispute Resolution Advisor. With FEMA, I work with only the employees. I don’t do any conflict resolution with survivors. 98% of my work is just between FEMA staff. I’m the troubleshooter. I do a whole range of things, including mediation and conflict coaching. But also we’re called in to set up and run meetings, design trainings and do conflict assessments. We hit the ground running, arriving at a field office and then just seeing what’s out there that we need to deal with. It can be just about anything.

I’ve been with the agency for 10 years now. It’s not full-time; I make myself available during certain dates. I also have a private practice in conflict management and mediation. And until a couple years ago, I was teaching conflict intervention and mediation in the master’s program at Champlain College in Burlington, Vermont.

How did you get started on the road to conflict management as a career?

I dropped out of college, worked for a year in a mental hospital, went back to college, and finished my bachelor’s degree in social work. I worked for quite a few years with prisoners coming out of the correctional system. They were still serving sentences, but they were reorienting in the community.

When my daughter was six, I returned to school, to Woodbury College, to get my mediation training in a year-long practice-based program. I did mediation and started teaching a class there. When they decided to turn their certificate program into a master’s program, I was part of the team that developed it. I got my master’s from Norwich University, after I had already worked in the field for ten years.

So how is it that you came to Roy Group?

Anne-Marie Daniel was one of my students at Woodbury. I was teaching an intensive three-day mediation course for the public, and Anne-Marie became a co-trainer. She and Ian left for Scotland soon after, but when they relocated to Canada in the early 2000s, she called me and asked whether I would help her develop the Opportunity in Conflict course for Roy Group.

At Roy Group, you hold the mantle of being a gifted teacher. Tell me about that.

I’m not a natural self-promoter! It always makes me feel a little uncomfortable. The skills that I bring to teaching come from my mediation work. It’s really about forming a relationship with your students, pulling information from them and helping them tap into some deep knowledge that they didn’t know they had, but that will be really useful to them. I don’t consider myself somebody who tells people stuff as much as somebody who tries to extract that learning from them. You have to form relationships with people. The key to that is trust.

Trust is so big. You’re very straight up, right? You’re pretty good at giving people an outside perspective so that they can advance.

When I need to give somebody clear feedback, I’m not shy about it. And it’s not always sweet. I never water it down, I never make it sound nice. I try to do it in a supportive way. And if there’s trust, I always assume that somebody gets that what I’m trying to do is pull this beauty out of them instead of critiquing them. Mediators are always trying to figure out how to move messages, and everybody is different. You have to learn how to read the room.

Why do you love conflict management?

Conflict is not intimidating for me. Probably because I grew up in a family of two boys who used to pick on me! I had to survive, right? I just kind of grew up with conflict, and so I’m not afraid of it. When I walk in a room as the third party, I feel like I can soar, because it’s not my problem. I get to see people moving to new places, because I’m there to help them do that. And there’s something really gratifying about being able to ask a question — like for example, I remember times in mediations when I’ll ask a question, and the person will sit there and just be quiet, and I know that I’ve hit an important spot. And sometimes they’ll even say, “Now that’s a good question.” And so when I see somebody’s wheels turning, I just get so excited. It’s really gratifying work.

So is conflict always bad?

I would say conflict is great. Conflict is the fire that causes change. If we could be better at it, however, the one thing I would say we would be doing is learning to listen. If we could listen to the meta-message that people are trying to convey when they’re in conflict… Because people don’t say what they mean when they’re in conflict, they say what they feel. When we’re really listening, we can hear the beginnings of the subtext. If I made up the timeframe of how long it would take a human being to really learn how to listen, I’d say a year. Because it takes a lot of skill. You’re not just listening and reminding yourself. You’re also asking questions, uncovering, pulling, you know, unraveling, reflecting. There’s so much activity to good listening.

Do you have any funny abilities or competencies that other people don’t have?

Well, I do have one. I wouldn’t call it a competency but rather something I’ve done that most people haven’t yet: I took flying lessons when I was just about 60 years old. I was by far the oldest student in the class, and it took me longer than most. But it was on my bucket list for years, and I kept saying, Oh but I could never learn to do that. And finally I just thought, What am I thinking, why not? Just do it.