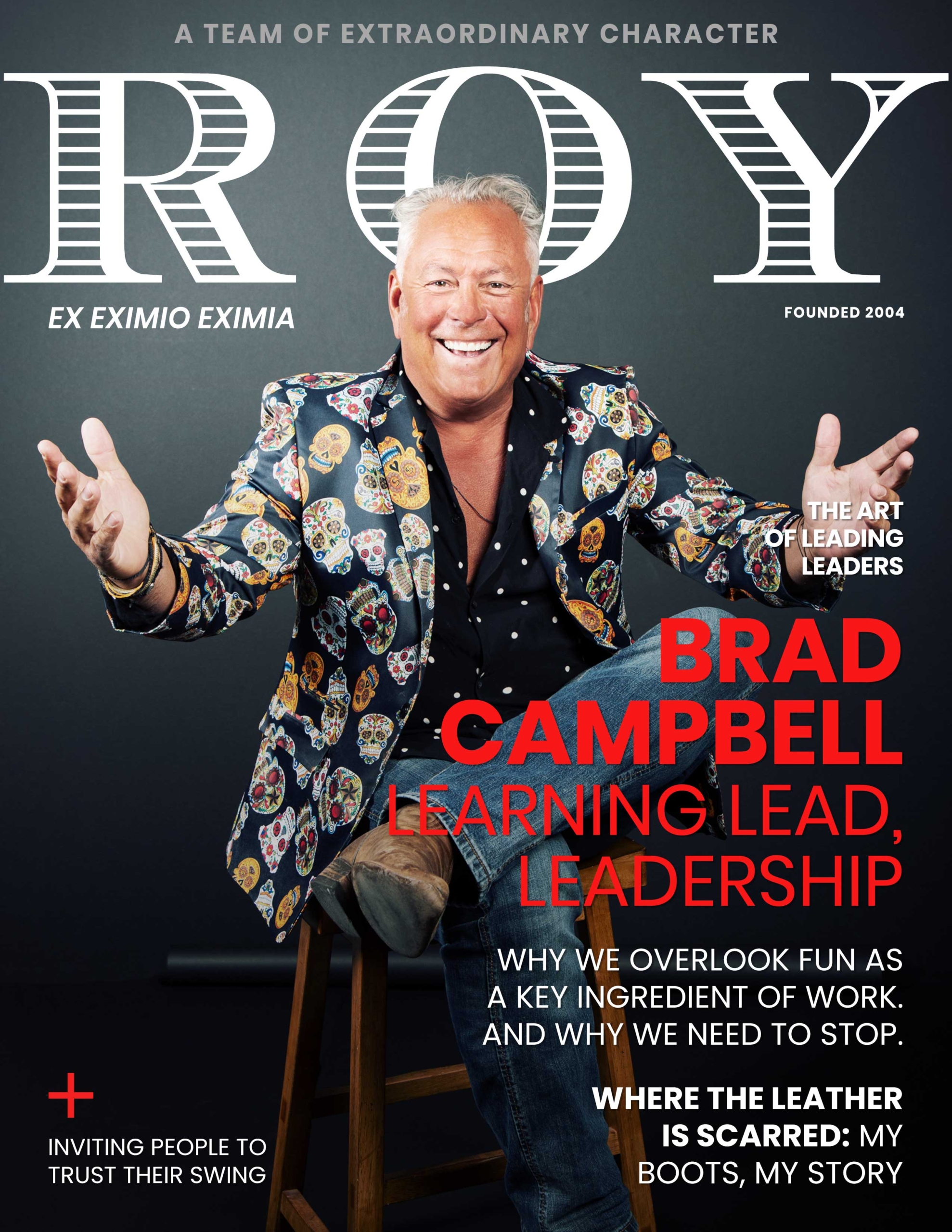 With a ready grin and a nose for joy, Brad Campbell shares with Roy Group his 26 years of experience as a coach and team leader. He carries a fierce commitment to understanding what other people desire, and finding a way for those desires to express themselves to best effect, resulting in a whole that’s greater than the sum of its parts. Brad believes every workplace should be a haven of enjoyment and fulfillment, where everyone can plug in and feel nourished. (And if that’s not cool enough, he also has a curious superpower: he can always tell you when it’s 22 minutes past the hour.)

How did you get involved with Roy Group?

What did Todd see in you that he knew would benefit Roy Group clients?

I’d been a coach for 33 years with Investors Group. But even before that, I had always had a desire to be a coach. If you’re a natural leader, you can’t stop yourself from coaching. You can’t shut it off, you know?

Once a teacher, always a teacher.

Well, that’s it, right? I’ve read volumes and volumes on coaching and how to get the best out of people. It’s a passion. I’ve always cared more about the people than I do about their results.

Where did that come from, this desire to see and draw forth the best in people?

It came from a really shitty business coach. In our lives, we’ve all had great coaches and we’ve all had terrible coaches. And the terrible ones taught me more of than the great ones, quite frankly. I had a long football career, and I had some amazing coaches that were able to bring out the best in me. And I had some really bad coaching over the years. I think that’s when I wanted to become a student of it.

When you were working as regional director, were you just leading teams or did you also have your own group of clients?

I had a group of clients when I started, back in Winnipeg, and then in 1990 became a regional director at the ripe old age of 29. From then, I led teams. I was basically a full-time coach for 26 of my 33 years at Investors Group.

Winnipeg, eh? So you’re a prairie kid, too. Is that the connection with the cowboy boots?

Maybe. I just love them. I believe in being yourself. But I’m all hat, no cattle.

You got cattle, Brad. Tell me what you get out of a good coaching relationship.

You’re really kind of building a scrapbook of relationships over the years. For instance, the guy who’s my financial planner now was a guy that I hired probably 27, 28 years ago, and taught him the business from the start. I mean, he knew nothing of how to talk to people, how to take people through a financial planning process. And now he’s taking care of a couple hundred million dollars and he’s got the cleanest financial planning book ever — he only deals with people that he loves and that love him. And every day is joyous for him: all he really does is understand where these people are, what their fears are, what their anxieties are, and then he fixes it for them. He does it better than I ever did. That’s a very cool thing to see. That’s the win, right? When you can get somebody to understand themselves a little bit better and want to try a little bit harder.

That’s the win. Where do you see the biggest gaps in leadership?

The biggest gap is leaders who just don’t care. If you enter into a leadership role and all you’re trying to do is manipulate another person to give you more or better or different results without really caring about what’s in it for them, I think that’s the biggest downfall. But if you can really figure out why people want to do something, they’ll actually do it. And if you’re not focused on the end result, if you’re really just doing your best in their service, you’ll end up with way better people. Nothing in business gets better until the people that are in the business get better.

Let’s zig backwards a little bit. Where did you study?

I had a scholarship to go play football in a small college in Nebraska, but the ride wasn’t big enough that I could afford to go. So I stayed back and decided that sales was what I needed to do to try and make some shekels and get out of sponging off my parents. I tried to break into professional football. I had the shortest tryout in the history of the Winnipeg Blue Bombers.

Actually a tryout? For the CFL?

It was an actual tryout. But the helmet didn’t get sweaty. I can tell you that. So then I went to work. I wore the Foot Locker stripes for a year or two. And then I went into banking, thinking that that would be a responsible place for me to go. That lasted a week and a half. I came back from lunch one day five minutes late. You know what happens when you’ve got 30 people waiting to go for their lunch, and now everybody’s gonna be five minutes late? The daggers were flying. I decided that maybe the entrepreneurial world would suit me better. So I walked into my bank manager’s office and handed in my resignation a week and a half into it. And he said, “But you’ll never be a manager like me, then.” And I said, “Oh, thank God.”

That’s a great thing to have clarity around at such a young age. You had courage.

Yeah, I had nothing to lose. I had a couple hundred bucks in the savings account and a case of beer for the rest of the week. I was good.

Tell me about your values. How do they shape your life?

The number one value for me is honesty. People don’t tell the truth as readily as they ought to. And sometimes the truth is painful. Also, I believe that there are too many people in business who are trying to manipulate others so that they can get to their own personal agenda. If I can sit down and try to understand another person — truly get to understand that person — I will be able to bring out the best in them. And my end results are going to be better. I’m going to get what I need out of this thing and they’re going to get what they need out of it, and that’s a good deal.

We need more people to take that longer view. Invest in making your relationships healthy and warm, and then the reward will show up. It just will.

What do you do with your free time?

I’m an addicted golfer. I would play every day. It’s physical, but it’s also very cerebral. And the better you get at golf, the more difficult the game becomes. I don’t think there’s any point where you’re going to say, “Okay, I’ve got it.” It’s a constant state of learning.

So when you say, ‘Trust your swing’, what are you saying?

Try to get — and stay — in flow. We question ourselves and our abilities constantly, which only serves to get in our own way. When things are going well, don’t question it. And when things are not going well, refocus, and trust your instincts! You need to ultimately take responsibility for your own shit. Yes, we need to surround ourselves with smart people and listen to them, but in the end, you likely know the answer. Stress comes from knowing what to do and not doing it.