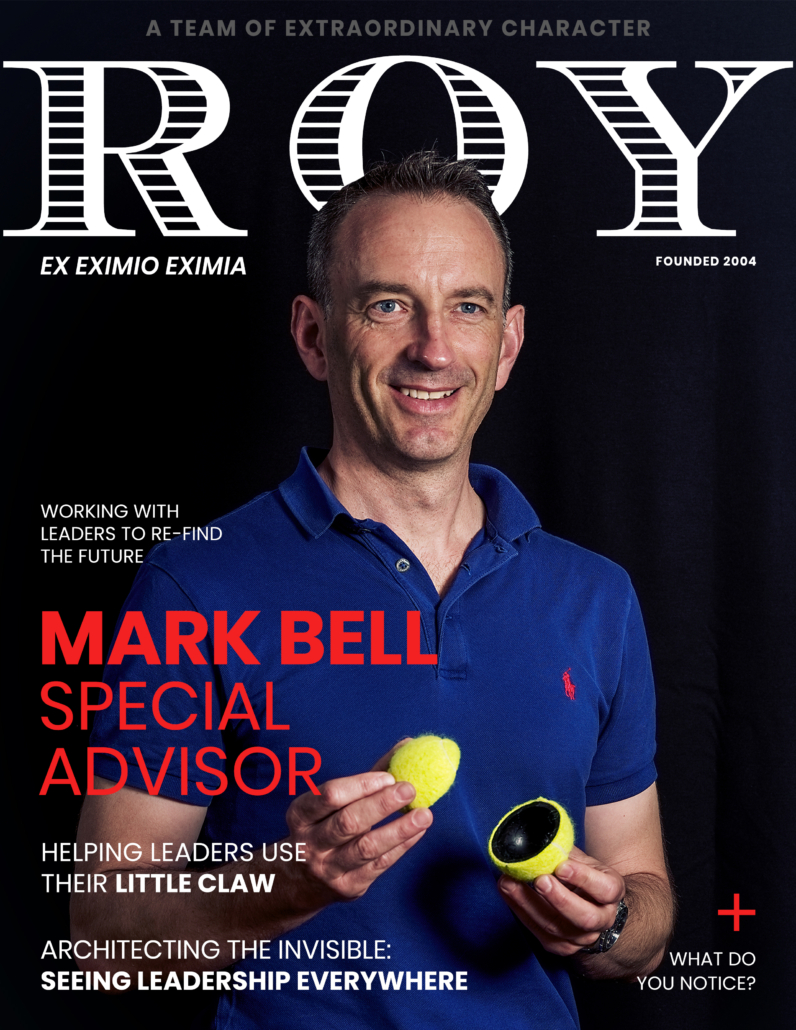 With a deep history of holding senior roles in major international corporations — and later coaching senior executives — Mark Bell serves as a demanding and loving advisor to the Roy Group team. Mark is unafraid to poke holes in our leaders’ ideas and approaches, knowing that his superpower is holding up the mirror — and holding others to account. We are fortunate to have his insight, his candour, and his unending loyalty. Anybody who can make the C-suite in his early 20s is someone who possesses leadership skills that the world can benefit from. And he’s ours!

Tell me about the early years of building your career.

I started out my career as a defence lawyer, but the system was killing me after five years. I applied for a post with Mars Confectionery and moved to London. I loved the company: it was very contemporary; everyone was equal; Forrest Mars sat in the canteen with you. I held some really senior corporate positions in my 20s — also at Boots, the pharmacy chain. I decided fairly quickly that being the ‘number one’ was not where my power lay. I was the guy behind the leader, always. That was my real strength.

You have a long history with Roy Group founder Ian Chisholm. Can you tell me how you met?

This is one of my favourite stories. I had heard about the project on Skye from a business partner who couldn’t make a meeting with Chiz. He asked me to stand in. So I agreed to meet at a roadside restaurant outside Perth, about an hour north of Edinburgh. I didn’t really know what he looked like, other than he was this young Canadian guy. And fair to say when he arrived, I almost got up and left without saying hello.

But that would have changed the world forever! Why did you almost ditch?

Because he was wearing one of the most ridiculous outfits I’d ever seen, and I thought this guy is obviously off his gourd. He had on these wide red braces hooked to three-quarter-length trousers and this ridiculous three-quarter-length waterproof bright blue and yellow jacket. He looked like he’d been awake for five days. I seriously considered leaving, but I steeled myself and dug deep. And within ten minutes we were having just the most fun.

What Chiz is excellent at is judging what’s going on, and he very quickly dropped the sales pitch. He started telling me what he was worried about, what was going wrong, how he had dragged his family over to the Isle of Skye. He was inviting me to really help.

And so began your relationship with the Centre on Skye. What was your role there?

Initially as a volunteer — a chance to have more fun. One day, Chiz and I went for a walk out to the northernmost tip of Skye — a place called Rubha Hunish. I was intrigued that he believed so deeply and practically in the leadership potential within young people from tough socioeconomic realities. I asked him if he would ever be prepared to put ten of his Glasgow kids toe-to-toe with my corporate clients from the banks in Edinburgh. Six months later we had four programs, full price, sold. The Gemini Project still, for me, is the most significant thing I’ve ever done. Everything about the program was spectacular. It was deep, it was life-changing, it was life-affirming. Every single corporate participant believed that this was a mentoring program where they’d come and help these wee kids. And they came up to Skye, and they were coached up and down the walls by 16-year-olds from Dundee, Edinburgh, Glasgow. One-to-one coaching every afternoon with your buddy, and you would have a practice coach in there with you — myself, Robert, Ian, whoever — who would give you feedback to improve your coaching. So a senior guy from Royal Bank of Scotland would use the skills that he had just learned to coach a 16-year-old girl from Dundee, and then after half an hour or 45 minutes, there’d be some feedback, we’d swap, and then we’d reverse the process and have the young person coach the banker. That executive would be asked questions that no one else in their world would have dared ask. What happened in those rooms is still one of the most special things I’ve ever experienced.

Robert and Chiz are as much special advisors to me as I would ever be to either of them. I’ve had lots of conversations with Chiz over the years: business models, staffing, purpose, values, how to handle things. And he’s done the same for me. So it kind of a co-challenging relationship if you like. I can be a bit of a force. I hold account. I’m a warrior. I don’t expect people not to do what they’ve promised. I totally believe that there are times to kick someone in the backside and get on with it.

Yet you also help leaders use what Roy Group calls their ‘little claw’ — taking a more non-directive approach that aligns with asking rather than telling.

My career progression is absolutely characterized by warrior leadership. And now, instead of being 80 percent warrior, I’m more like 20 percent. I was renowned for executing, for being thrown into things that weren’t going the way they should, for giving very direct feedback. Now I’m more about noticing: what is the moment I’m in, and what is the right and helpful thing for me to offer and serve with? In coaching, there’s a fine balance between noticing in the moment, being aware of what’s helpful or unhelpful, and also getting out of your own way.

Can you talk a little more about the importance of noticing in the moment?

I’m talking about the tiny things in life that are massively significant, and that we never take notice of. I’m talking about the people who have influenced me in the community who were never getting paid to do the stuff they did. Did we notice them? I’m talking about the different seasons, the different flowers, the way someone walks into a room, the way they walk out of a room, all of these things. Are we truly noticing, or are we engaging without noticing? And also then there’s the journey inside, what are we noticing about that? To state it simply, you have to be inner-directed and outwardly open as a leader. But most leadership development programs start with outward openness instead of inner direction. That’s a fundamental mistake.

What I see still happening in organizations is when people take a leadership course, they’re given a 360 on day one. And then after the 360, they’ll talk about what you believe, what you care about, who you are, where you see your strengths. Let’s ask those questions about what you believe, your inner direction first. The order must start with a human being. That’s what Roy Group does with the feedback model: Let me ask you first. What worked well? What’s the inner voice telling you? And now are you prepared to be outwardly open?

You’re a single parent, which means life is often more about running multiple lives than savouring free time! But if I waved a magic wand and gave you four extra hours a week, what would you do with them?

I would be outdoors, with a camera or such, or biking, or running up a mountain. I might be somewhere like the cinema or the theatre.

What about special hobbies or any weird competencies?

I’ve played on a hit single, I don’t know if that’s a special competence.

Totally! How did you manage that?

Student band. We were in the Top 100. That’s a hit, right? We were number 98. My flatmate’s brother, who was the bass player, was ill, so I played for three months — just as we released a single. So I get all the glory. And then we had to part because of musical differences. I was kicked out when the brother was well again. But I have played on a hit single.