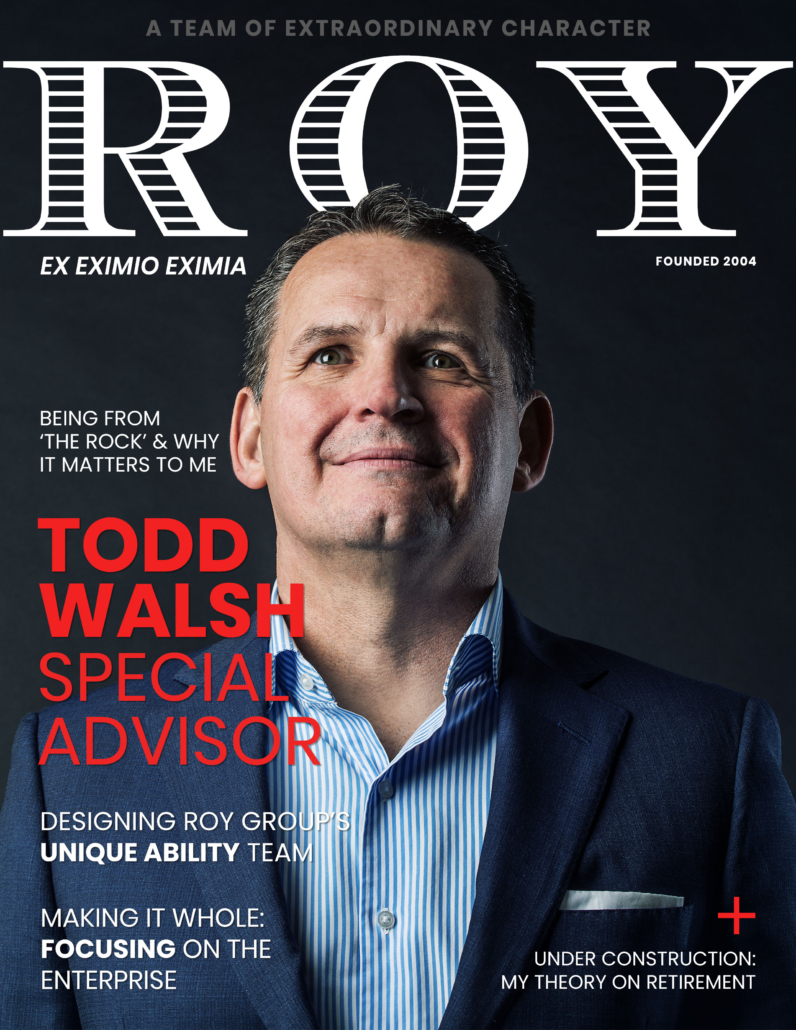 As a special advisor, Todd Walsh brings a level head, a Newfoundlander’s understanding that your conduct is how people come to know you, and a gift for positioning people to serve best using their unique abilities. Hand-picked for his excellence in developing leaders during his previous career in the financial industry, Todd embodies our core value of focus. (As a poli-sci grad, he’s also a biography nerd and shameless info-vore, so if you want to geek out on historic figures, Todd’s your guy.)

How did your early career lead you here?

I did my degree at Carleton University. I took a year off to work and travel and decided I would work for a year at Investors Group, then start law school. I wanted to pay my own way for my second degree. My business plan back then was very sophisticated: I basically jumped out of the bushes asking people if they wanted me to be their financial planner. I knew that I needed to do well. Chris Shepherd’s great insight later on epitomized my approach (he’s now one of Roy Group’s advisors): you needed to make a game out of it, or it would make a game out of you.

I didn’t end up going into law, because I found what I was looking for at Investors Group. I worked in Ottawa for a year, then one day while I was shoveling snow, I got a call from a friend who was windsurfing in BC. Windsurfing! And it was St. Patrick’s Day! I decided it was time to move. I relocated to the Okanagan and worked with my dad in the IG office there as an advisor for four years, then I became a division director. In 2006, I moved to Victoria to work as the regional director. I stayed in that role until I retired in 2018.

Somewhere along the way, I was introduced to Roy Group and took the Leader’s Discipline. Holy smokes. I became a raving fan and introduced all of my colleagues to it. Then I went on a leadership learning journey to India with Yolanda and Chiz, and just saw the scale and impact of this work. I wanted to be a part of it, and now I’m here.

Here you are, indeed, and not retired at all. We need a different word than “retired” to include people who go for their stretch assignments after they wind down their primary career.

Right? As a client for many years of a program called Strategic Coach, I was taught to operate with a focus on a bigger future and a no-retirement mindset. I’m mindful of becoming too complacent, acting and feeling like I’ve “made it”, or resting on my laurels. Committing to being a lifelong learner and wanting to make future contributions to society and to one’s network that are larger than past contributions helps to keep that complacency at bay. There are many examples of people in the arts, entertainment, academia, business and politics who never stopped growing, never stopped focusing on their contribution, and did their best work in the autumn and winters of their lives. In my case, being associated with an organization like Roy Group that has such a compelling offering inspires me to operate with that intention.

And you do operate with that intention — and with intention in general. Tell me about the importance of focus and intentionality when it comes to Roy Group.

Focus is such a crucial component to success in any endeavour. It’s so easy in today’s digital age to become distracted. In any business, there are myriad opportunities that can present at any time, and directions you can steer toward. Getting distracted or trying to “boil the ocean” — essentially losing sight of what we are best at — is fraught with peril. The key is to understand our values, our purpose, what we can be world-class at, and how we are different. That goes for us as individual people, as well as for us as the Roy Group team. Once we have that clarity, all of our focus, attention, talent and energy must go toward creating value in the lives of our clients.

How else do your values show up in your work with Roy Group?

Effective leadership can be a behaviour modifier. As a financial planner, you have to lead your clients to do that which they don’t already do, much like a personal trainer. With Roy Group, the whole notion of the primacy of conduct is aligned with that. The whole notion of leadership at all levels is aligned with that. The whole notion that Mentor is a gift word versus being a know-it-all, and that it needs to be bestowed upon you, and it needs to be earned — that’s the alignment. I really think the world would benefit from better tools to engage more effectively and constructively in dialogue. There’s a cynicism that doesn’t need to be there. My transition to Roy Group was very much values-driven, very purpose-driven.

Your dad said something to you many years ago that became a guiding tenet in the way you interact with others.

Yeah. My father was a bit of a rare bird. He was just a young man when he started down the road to personal development, reading Norman Vincent Peale and Dale Carnegie, all those early thinkers. He was my first Mentor and often said, Envision yourself always, always, always putting your hand on someone’s shoulder, never in their wallet. Which means if you focus on your contribution as opposed to the reward by adopting a servant leadership approach, keeping your focus on client outcomes as opposed to personal outcomes, you’ll eventually get back much more than you anticipate. If more leaders in the world had that lens, we’d be in a better position.

You grew up in Newfoundland. Tell me how that experience shaped what you call your “true north”.

Growing up in Newfoundland is formative. Nobody asks what you do, what you drive, or how much you make. They ask you who your parents are, and who your grandparents are. In almost everybody’s house, where we would have a piece of art — a sculpture or an oil painting, whatever — in Newfoundland, it’s more like three or four generations of family photos. There’s a connection to community. At the end of the day, who are you going to be?

How is it that you grew up in Newfoundland but I don’t hear it in your voice?

So you can switch between them?

Buy me a beer and you’ll hear it.

Would you consider that to be one of your weird talents?

No weird talents. I can touch my tongue to my nose, but that’s about it. Well, and I almost made it onto Jeopardy.

Yeah, I filled in the bubble score sheet wrong. I got all the questions right in the end, but I wanted to leave the third question blank while I was working because I was going to come back to it. But then I answered the fourth question in the third blank and so on.

Groan. It wasn’t meant to be, I guess. You had more important work to do. So when you’re not at work, what would we see you doing?

I love to read. I’m hugely curious. I love to ride my bike. I love to try and stay fit. I love to travel with my wife and son more than anything, probably, because I feel free and we get to experience the world together.