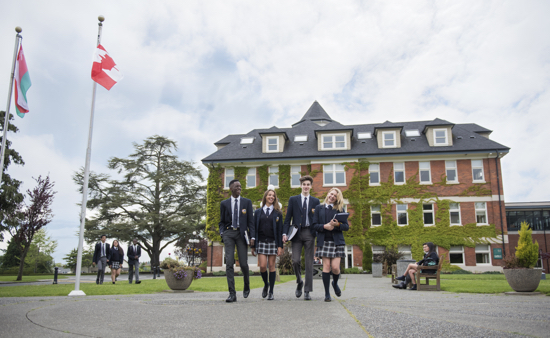 A little over six years ago, I and my colleagues on the management team at St. Michaels University School (SMUS) participated in a Roy Group experience called The Leader’s Discipline™. This two-day experience was the gateway to both a personal and organizational journey that is still continuing today.

It was during this experience that I began to see how my own philosophy could be best aligned with our organization’s to help foster high-performance teams — teams that utilize the many strengths of their members while honouring them as individuals. The foundation of the work would be implementing my particular coaching approach to leadership.

We recognized that, although our function is to lead and educate, it is our teams and students that ultimately have to perform — similar to a coach and a sports team, where the players play the game; or a conductor and an orchestra, where the musicians play the instruments. The success of the team hinges on its ability to execute in those moments that count: it is their actions — not the leader’s actions — that will affect the field around them. Therefore, as both leaders and teachers, we have some choices as to how we work with people to position them best for these moments.

Consider Roy Group’s definition of coaching as “the intentional positioning of others to perform at incrementally higher standards, to learn more from their experiences as they emerge, and to be increasingly engaged in their endeavours.”

When applied to one’s working relationships, this process not only helps in achieving the stated goals of a position or role, it also intrinsically creates a culture of ongoing learning and collaboration between both leader and team, and among team members. It does so by creating a space for dialogue that is growth-focused and low in judgment. The elegance of this approach is that it simply can become the way that we lead — every day.

At SMUS, we began by providing workshops on coaching and providing feedback to those who were interested. Management team members were allotted two Roy Group coaching hours per month that they could use, gift, swap or collect to use later for whatever they needed.

Gradually, leaders began to incorporate scheduled feedback meetings with their teams and to employ the principles learned in these workshops and through their coaching sessions. At first, efforts felt scripted and at times even artificial. However, as we practiced together, we honed those formal meetings into sessions conducted with ease and elegance, now comfortable with the beliefs, language and approach. Over time, we began to use coaching tools more informally, with people asking colleagues for coaching on the challenges, problems, idea and aspirations that landed in front of us.

This six-year coaching experience with Roy Group has provided SMUS with a foundation for better facilitation, leadership development of student leaders and improved interactions with our stakeholders. Ultimately, we have learned that leading means helping others be their best.

Keith Driscoll is Director of Residence and Student Life at St. Michaels University School in Victoria, BC. Keith is also the winner of the MacGregor Cup, Roy Group’s highest honour, which each year acknowledges a remarkable individual whose leadership development activities have made a significant impact on their communities and organizations.

For upcoming sessions of The Leader’s Discipline, see Open Courses.