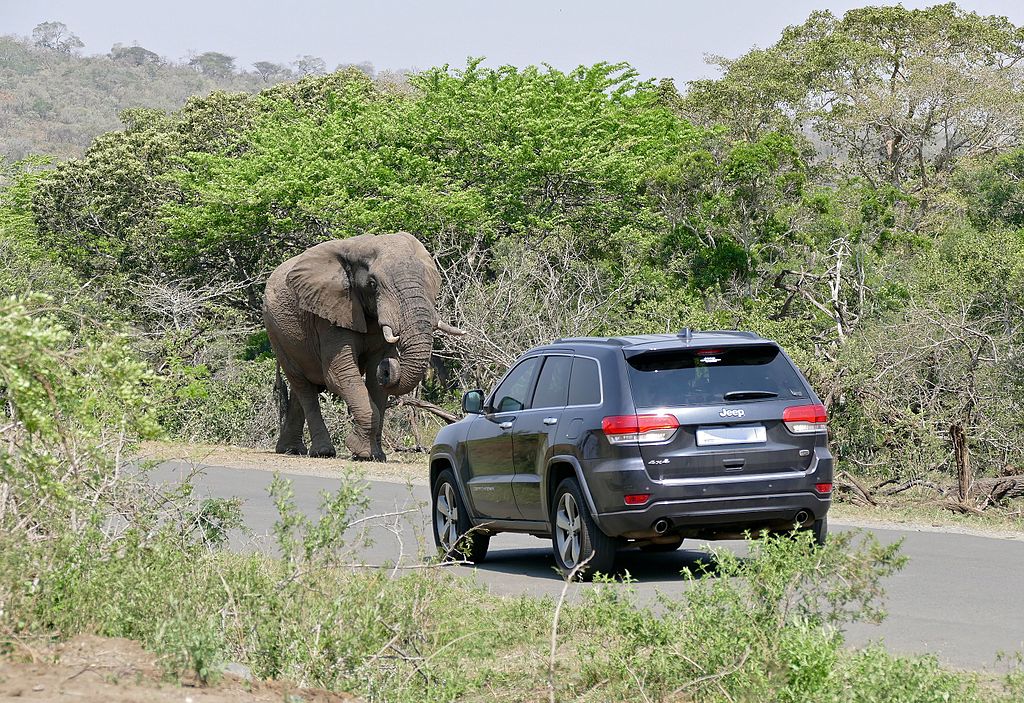 We were sitting in our tiny rental car facing off with a herd of elephants. A herd of very large elephants.

My 18-year-old daughter Sydney and I had only just crossed the border into Hluhulwe Imfolozi Game Reserve in South Africa when we developed a sharp awareness of how vast and unpredictable game reserves can be. The roads are narrow and unpaved. There are no road signs, towns or fences to keep the wild animals contained. It was just us, our little car and a questionable map. We did have a vague idea of where we were going, so weren’t operating completely without our senses, but I later came to think of this first day as not unlike a child’s guileless first encounter with a fuzzy large bear. We were wide-eyed and innocent, not quite awake to the immensity of the wilds we were entering.

So far we had spotted groups of immense, graceful giraffes; warthogs skittering frantically through the brush; water buffalo (which looked perpetually pissed off); and zebras — lots and lots of zebras. As we rounded a curve in the one-lane dirt road, we were surprised to see five enormous elephants lumbering steadily toward us.

“They won’t hurt us,” I said. “We’ll just slowly drive toward them. They’ll get off the road.”

I crawled toward the elephants, hoping like hell my guess would turn out to be right. As we approached, I grew increasingly unsure of the wisdom of this strategy, but at the last minute the group veered off the road. As we passed the herd, a large bull turned in our direction. I held my breath. The bull flared his ears and stamped his enormous foot. Clouds of dust rose with the tremor.

My daughter was uncharacteristically quiet for the remainder of the afternoon.

The next morning, over coffee in our thatched hut inside the park, I pulled out the map and started to lay out my plans for that day’s drive. As I was excitedly outlining our route, Sydney interrupted.

“You go ahead and go. I’m staying here today.”

“Mom,” she said, “I’m not going with you. When I asked you to stop because I was scared, you didn’t listen. I don’t trust you.”

These powerful and painful words were spoken quietly and without emotion. I might say even without judgment. They were simply stated as fact.

I took that day’s trip by myself. It was a sad, scary, lonely journey. Not so much because I was alone, but because I had carelessly let something quite precious slip from my grasp. I had to travel halfway around the world to learn a most important life lesson. Trust is a powerful thing, not bestowed casually. Trust, once lost, is an enormous bridge to rebuild.

The Emotional Underpinnings Of Conflict

I think the best definition of conflict is to come into collision or disagreement; be contradictory, at variance, or in opposition. Seen in these terms, conflict is value-neutral, which means it isn’t inherently bad or good, it just is. It would be quite surprising to encounter a person who has never experienced personal conflict of some kind. If we accept the proposition that conflict is a fact of everyone’s life, we can either see conflict as a glass that is half empty or a glass that’s half full. When viewed as a half-empty glass, conflict often casts us in the role of victim: someone is trying to make our life difficult. When viewed as a half-full glass, we can see conflict as an opportunity to take control of a difficult situation and actively try to make it better.

Conflict is scary to some people because it’s often steeped in negative emotion such as anger, anxiety, and frustration. If we don’t have some skill at handling communication when there is high emotion, our tendency is to try to avoid it or to lash out. I imagine we would all feel similarly out of control if someone put us in a raft on a wild river and we didn’t know anything about how to manage the oars or handle the boat.

Learning how to handle conflict is incredibly important for leaders. It’s important for anyone, really, unless they’re living in a cave on a mountaintop, but significantly so for leaders, as they set the tone for their team’s engagement and ability to work in harmony. My suspicion is that most leaders feel they are already pretty good at managing conflict in their work environments. Many of them, however, are shielded from conflict by virtue of their position of relative power, which allows them to delegate conflict resolution, ignore it, or sometimes even overrule it. The same may not be true in their personal or private lives, where conflict may be harmful or unproductive.

Conflict must be faced, and it always goes better when one has the proper tools to navigate well.

Learning skills to deal with conflict reduces fear and anxiety. Conflict resolution tools give us the ability to calm a highly emotional situation, focus the interaction in a positive direction, articulate our needs in a way they can be understood by the other party, manage our own emotions, and ultimately help the other person feel heard and understood.

The single most important question we need to ask ourselves is: Do I want to have this conflict resolved? Some conflicts have a long lifespan because the people involved are getting some energy from being in conflict. This happens more than you might think! We humans have a tendency to hang onto our pain, alternately poking at it to justify our walls, or avoiding it altogether. But if a conflict is not serving your highest purpose and you need to get it resolved, then approaching it as a mutual problem to be resolved is the best place to start.

The best tools for managing conflict well are to: 1) listen carefully and try to understand what the other person is saying before you try to convince them of anything and 2) before you even engage, have an honest conversation with yourself about what’s going on for you. Not what you think is going on for them, but what is going on for YOU. What is the story you’re telling yourself? Start there.

Figuring out how to navigate conflict well goes a long way to shaping the way you see yourself and the way you conduct yourself. In turn, this shapes the way others see and respond to you. Dealing capably with conflict builds trust. There is a useful quote by some wise person — the internet can’t agree on who — that goes something like: I am not made or unmade by the things that happen to me but by my reaction to them. Through the conflict I experienced with my daughter in Africa, I was reminded to listen and understand Sydney’s hesitation, to examine my own story around it, and to look for a strategy that would help us move forward. That strategy was to work on rebuilding the bridge of trust, one truss at a time.

Alice Estey is a Special Advisor to Roy Group.