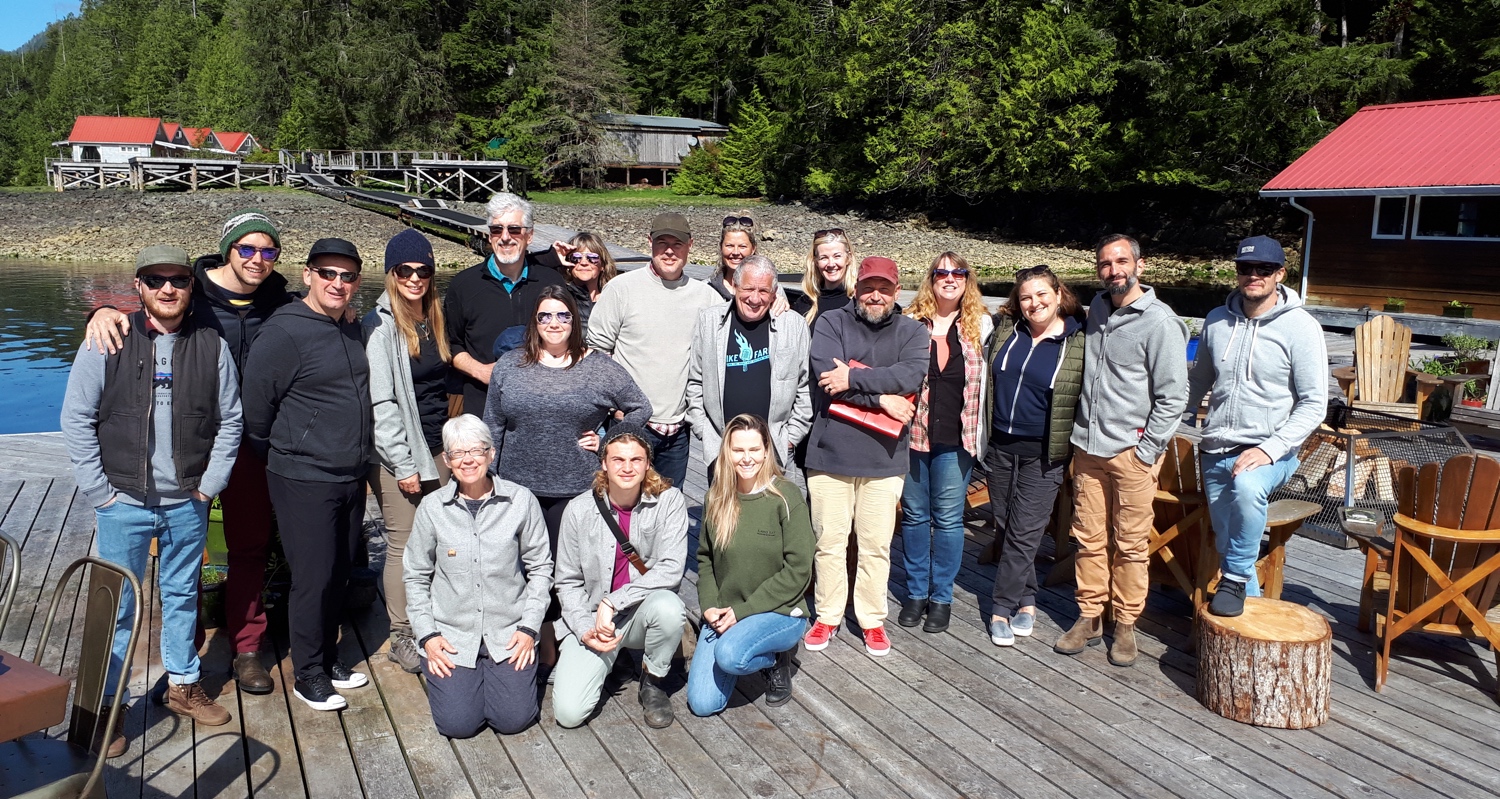 A poet’s work is all about creating a language big enough to represent both the world that you inhabit and the next, larger world that awaits you. – Lisa Burrell interviews David Whyte in “A Larger Language for Business,” Harvard Business Review (May 2007)

Small, large, quirky, established, entrepreneurial, institutional — these are some of the adjectives used to describe organizations that are as varied as the people who work inside them. Yet often this wide array of adjectives is unable to communicate what it actually feels like to work where we do. That’s when we reach to the top of the language shelf for a metaphor.

The subtleties that everyday language fails to convey are often better expressed in a metaphor: management describes their current project as a trainwreck; a protégé labels her Mentor as a Jedi; a disenchanted team defines their office environment as a nest of vipers; a journalist writes how the marriage between two countries is being tested; a team refers to the next phase of their business as Everest; a school faculty terms themselves a family.

In the realm of symbol, where one thing represents another, the spare language of poetry has the ability to capture the multiple layers of meaning inherent in a situation in just a few words. A metaphor allows the listener to instantly grasp a deeper, richer meaning and to experience the feeling behind a concept. Someone using a metaphor in conversation is expressing a desire to have the listener fully understand all the aspects and unique complexities of an evolving situation. We should pay attention.

While there are boundless options for metaphorically capturing the essence of our workplaces, as leaders we would be wise to choose our metaphors carefully for, once chosen, a metaphor has the power to shape our work and to shape us.

Back to Basics: The Metaphor of Family

BARTLET: “…You guys are like family.… I love you all very much, and I don’t say that often enough. [to Sam] So, tell me what the problem is, Toby.”

Family is an enticing metaphor that has surfaced more and more across sectors in the last few years. Highly accessible and easy for anyone to relate to, since we all come from one form of family or another, the family metaphor is common in business today. But for thousands of years, family was not a metaphor at all. Family was the work unit of society: the family farm, the ma and pa shop, Vendor & Son and Acme Bros. These familiar shingles have hung throughout our history, clearly signalling that families of related people routinely worked together.

Today we’ve moved on from the actual to the metaphorical family in the workplace. We have cast unrelated people into roles where they work closely together, as “family.”

Why has family re-emerged as a symbol to engage people in the workplace?

We suspect that, with up to four generations working together and attempting to find function in their differences, organizations are trying on this most familiar of organizational metaphors. We suspect that the popularity of the family metaphor stems from organizational leaders reaching out to engage Millennials — the generation that has made it clear that they value balance, strong social connections, active feedback loops, and an emotional connection to their work and manager.

Families, as fundamental to our existence as they are, have their shadow side: they can be painful, awkward and irrational. As adults, there are few of us who do not wrestle sooner or later with family-of-origin issues, the barrage of hang-ups, fears and mental models, authority figures, and/or learned helplessness that contribute to the stew of dynamics shaping who we believe we are.

People also frequently hide things in families. We sidestep uncomfortable topics so that all can save face. Often there is a strange sense of avoided accountability: “Oh, that. That’s just Uncle Fred being Uncle Fred.” Or, “It’s just always been that way.” Families can come with all sorts of unfair obligations, unchallenged truths, and compromised autonomies. Bad habits, mimicked patterns and suboptimal survival mechanisms are often acquired in families. We might be prepared to lie, cheat or steal for our family. Our souls take some bruising in families; it’s an inescapable dynamic of being human.

And then, one day, in order to fully leverage our own personal sovereignty, we leave our family (in a real or metaphorical sense) to begin our own lives. So why would we want to model our organizations after an entity that people have to leave to fully become themselves? Do we really want to work for “the family”?

Side note: There’s a reason that organized crime uses the family metaphor to get things done.

The tough thing about families is that someone has to be parental and occupy the throne of power. But in business, the metaphor of leader as parent has several serious limitations when it comes to describing the kind of stewardship organizations need today. Placed on a pedestal of biblical proportions, parents are not questioned, they are revered. What mummy or daddy says, goes.

Parents are never subjected to performance reviews, or given honest feedback or encouraged to admit that they need to learn more about their craft. We position them as unquestionable authorities who will tell us what is proper and to be valued, and what is not. Parents are not allowed to show weakness or to admit fear. Instead, we believe in the Santa Clauses they swear to be real and believe that we are safe because our parents are in control.

While the metaphor of family is neither exclusively good nor bad, we need to realize that, as Chief Poetic Officers of our organizations, when we brand ourselves with a metaphor, we create possibilities and also impose limitations where our good intentions may be matched with unintended consequences. As leaders, we must be alert to both potential outcomes.

At Roy Group, we prefer the metaphor of tribe for organizations. At its best, it is a colourful metaphor, one with character, ritual and mystery.

In an ideal tribe, autonomy is not traded in for accountability. Individuals have responsibilities to the collective, and within those responsibilities are able to leverage themselves into the work to create a virtuous cycle that assists the self with personal growth and knowledge. This is a far cry from participating in an ongoing vicious cycle that subjugates the self to unconscious familial patterns.

As Seth Godin points out in his brilliant little book Tribes, modern-day tribes have been appearing for several years now, largely due to social media’s capacity to introduce and unite people who share a passion. We like the metaphor of tribe better than the metaphor of family because it embodies some of the strongest, best elements of the family while allowing more personal autonomy. It also invites adult-to-adult, rather than parent-to-child, relationships to flourish.

Defined by a blend of three key characteristics, the paradigm of a modern-day tribe proffers an exciting new metaphor to which our teams and organizations may aspire.

1. Tribes are fundamentally about something bigger than themselves.

2. Tribes value the archetype of the elder or tribal leader within the community.

An elder embodies the spirit of the community’s purpose at what feels like a cellular level. Tribal leaders have no need to explain their values or philosophy: they wear their intentions on their sleeve. They are teachers, advisors, and confidantes to the next generation. They invest in the next generation. Tribal leaders are trusted and become more potent with each organizational challenge. They invite tribal members to present their finest selves and make their finest contribution, continually fostering in others the ability to take up their own personal leadership challenges.

3. Tribes use tools, rituals and ceremonies to deal with arising concerns.

Even though the content may be new, tribes have a predictable system of practices at hand for responding to issues. They know what kinds of gatherings or discussions are needed to plan for the future, respond to a crisis or address a wrongdoing. Tribes convene whatever conversation is necessary in order to realign them with their noble promise. Moreover, there is a functional transparency of how business is conducted for all tribal members to see, which holds them accountable to each other. There is less nonsense in tribes: the costs of not staying true are too high.

Are we prepared to honestly examine our shadows, old and new?

Crafting this article enabled our Roy Group team to take our own advice: we weighed the shadow side of a modern-day tribe against its strengths before completely signing on.

Thus, even when we embrace the modern-day tribe as a metaphor, we must keep our radar keen for signals of corruption, arrogance and insularity within our organizations.

What would it look like if your team grew into the vision of the high-quality team that has been wavering on the horizon?

As a leader in your own organization, you can connect with the upcoming generation to discover your own organizational metaphor by engaging them in a conversation. What adjectives describe how it feels to work together now? How would they like it to feel? What metaphor would invite your team to perform more masterfully, to learn more voraciously, and to engage more completely? What metaphor “represents the world that you inhabit now and the next, larger world that awaits you” at the same time?

Find an imaginative way to convene that conversation.

Ian Chisholm is a founding partner of Roy Group.