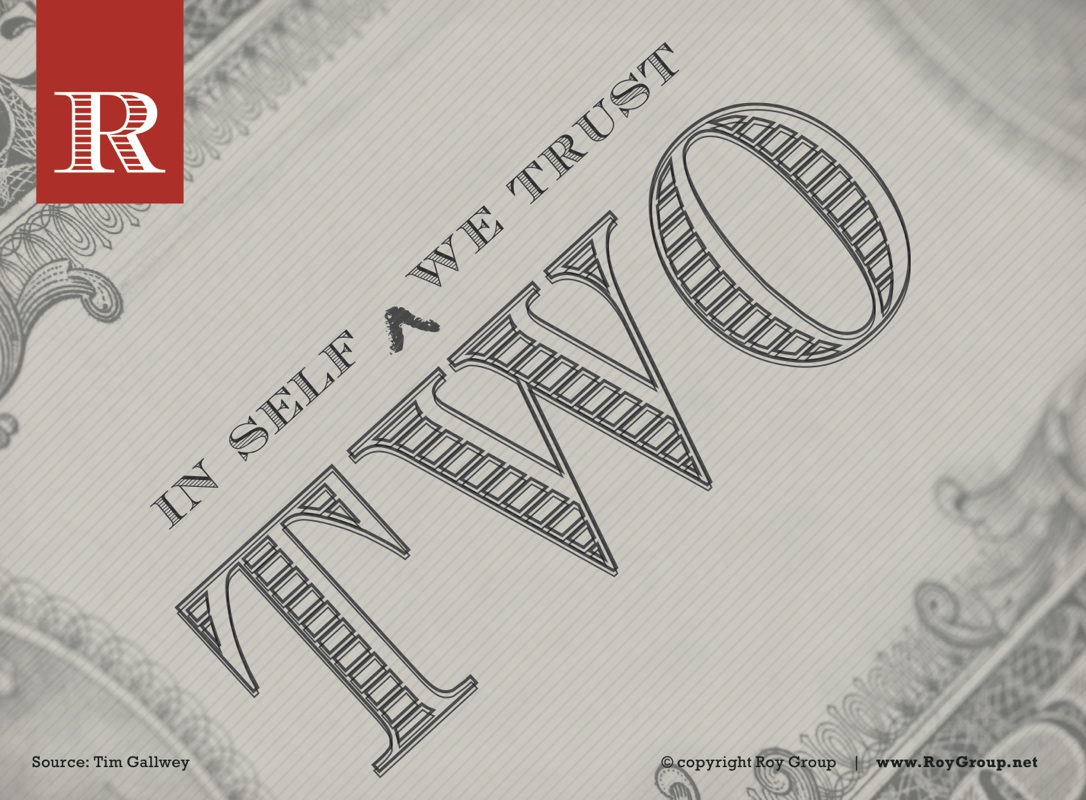 The Inner Game is about high performance, learning from experience and enjoying all of one’s life. After 40 years of observation, these three attributes are what happen spontaneously when a person is working or playing from their natural self. You can observe all three in young children who are just being themselves, showing the many qualities we admire and love.

A good example is three-year-old Michael Patton of Dublin, Ireland who made the news a few years back in a home video that captured him giggling and nonchalantly hitting a string of chip shots through a hole in the roof of his playhouse.

Yet, somewhere in the process of trying to control them to be the kind of children we think they should be in order to fit in with society, we parents and teachers make it more and more difficult for growing children to access the original qualities and attributes they were born with.

At a Roy Group gathering recently, I asked participants to make a list of the inherent attributes they observe in young children. Here is what made the list:

After listing these attributes and reflecting upon them, it was impossible for the participants not to develop an admiration for our human existence and to realize that they were once the same way: spontaneous, curious, joyful — free.

And then a rather confronting question came up: “So, what happened?”

This began the discussion about the emergence of Self 1 and its ability to decide, “I’m not good enough,” “I can’t do this,” “I’m always wrong,” “So-and-So is so much smarter than I am” or even “I’m the smartest, the best!” “Look what I can do!” etc.

My recognition of this phenomenon started while on sabbatical from a career in higher education, when I was instructing tennis. This was a time when my Self 1 was strongly crippling me. I began to notice that most of the “shoulds” and “shouldn’ts” I was imposing on my students, though technically correct, actually interfered with learning and performance. So instead of just looking at the students’ strokes and correcting every instance of “incorrectness,” I started asking a different kind of question: I wonder what’s going on in the minds of these tennis players when the ball comes toward them?

What I discovered changed the very foundation of how I taught. For the most part, the tennis students were trying to remember my instructions, trying hard to do what I said they should, and trying hard not to do whatever I had told them they shouldn’t. In the act of “trying hard” they tightened too many muscles and their shots looked stiff and mechanical. To complicate things further, when I would sometimes say, “Relax,” they would get really confused. By “teaching” tennis, I was making tennis harder to learn.

As I started paying more attention to the learning process and less attention to the teaching, I myself learned a lot. Not so much about teaching, but about what actually supports learning and what gets in the way. I learned that, when I asked my students to pay attention to what was happening in their experience, they learned naturally, as children do, more quickly, and, surprisingly, with the enjoyment of seeing themselves improve without being taught how. Instead of analyzing why a student wasn’t hitting the ball in the middle of the racquet, then giving three or four corrections based on that analysis, I simply asked the player after each shot to point out the place where the ball actually hit. I would often say, “Don’t try to hit the ball in the centre,” (just to calm Self 1 down) “but be as accurate as you can about where the ball hits.” About 95% of the time, it took fewer than seven swings before the student was pointing each time to the centre of the racquet.

“Are you trying to hit in the centre?” I would ask neutrally, and the reply was often something like, “No, I’m not doing it, my racquet is doing it.”

“Pretty smart racquet,” I would reply. “How does it feel? What do you notice? What are the results?”

“It feels great, more solid, sounds better, and the results are much better.”

“If you weren’t trying to do it, how do you really think it was happening?” I would ask.

“I have no idea,” was the usual reply.

My only guess at the time was that, when thinking about the shoulds and shouldn’ts and trying to hit the ball correctly, the player didn’t see the ball very well. Later, I realized that my instructions had been invoking the players’ stress system — releasing stress hormones —and, in simple terms, evoking the fight-flight-freeze-flock response. In such an environment, the player saw the approaching ball as a “threat” or “a probable mistake” flying through the air. They would often back up (flight), then tighten too many muscles to lash out at the ball (fight), while trying to conform (flock) to how everyone else did it.

Of course, the player’s physiological reactions attended to this perception of the ball, and the results were usually worse than desired. Thus the player would confirm his pre-thinking: “I don’t have a very good backhand. I’m not a very good tennis player. In fact, I guess I’m just not good at sports.” And, finally, after a few more disastrous shots, “I’m not a very good person.”

Self 1’s favorite trick is to get you to identify yourself with your performance. It wants you to think you are Self 1 or, as my Dad used to say, “I’m a self-made man.”

Of course he meant something different, but remembering Dad’s phrase made me shudder at the thought of my Self 1 trying to make me who I was, rather than discovering the Self I had always been and would always be during the journey of my life: an independent being with consciousness, with choice, and with a treasure of unimaginable seeds of potential that I could enjoy as they grew and developed.

Who would have thought that the journey was designed to be a beautiful and graceful process of learning through experience as well as learning to understand and appreciate the value of the gift we have been given, simply by being a human being?

W. Timothy Gallwey is the bestselling author of The Inner Game, a series of books which set forth a new methodology for the development of personal and professional excellence in a variety of fields. His long-term clients include Apple, AT&T, The Coca Cola Company, and Rolls Royce, where The Inner Game is applied to leadership, sales, change management and teamwork.

Tim was a special guest leader at Roy Group’s first ever Mastery Forum in Victoria in May of 2013.